I just happened upon Lou Dobbs’ commentary on CNN:

But there is additional uncertainty about the outcome of our elections that is intolerable and inexcusable, and which could make the contested 2000 presidential election look orderly by comparison. As of right now, there is little assurance your vote will count. As we’ve been reporting almost nightly on my broadcast for more than a year, electronic voting machines are placing our democracy at risk.

Across the nation, eight out of every 10 voters will be casting their ballots this November on electronic voting machines. And these machines time and again have been demonstrated to be extremely vulnerable to tampering and error, and many of them have no voter-verified paper trail.

There is simply no way in which election officials and their staffs of thousands of volunteers with limited experience and often poor training can possibly carry out reliable recounts.

Voting at risk? I should say so! Not that this is new news, but it is worth noting. What can we do about it? I’m not really sure. I’m still trying to figure out if Illinois has moved to electronic voting. For now I’m going to register to vote (as I just moved) and hope for the best.

A few links of interest:
Security Analysis of the Diebold AccuVote-TS Voting Machine – Princeton University
Cracking a Diebold in 4 min with 12 dollars

For those video lovers out there!

Mark – next time you should try using this thing to go down the hill mountain!

This was prompted by an e-mail that Katty had sent me the other day. Anybody who suggests that I shouldn’t drink Red Bull should expect a deluge of information!

Good god – maybe Dave was ahead of us all of this time?! 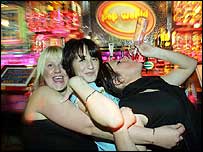 According to our study findings, it is possible that adding taurine to alcohol during drinking could help to minimise liver damage and ward off a hangover, although we need to carry out further studies to confirm the effect in humans…

…The results are encouraging for those keen to minimise the harm the festive season inflicts. And when it comes to damage limitation, perhaps a taurine-rich energy drink might be just the thing with which to toast the New Year…

I had no idea that Red Bull was banned in France!! Beau and Wourms – maybe that’s why we paid $18 per RedBull Vodka at Macumba!

I figured this was appropriate given how we are all getting older! (Happy Birthday Mila!) Advice given to a twentysomething from a fiftysomething Washington Post reporter (Gene Weingarten).

Cleanse your language of certain callow affectations common to your generation, for they will not serve you well later in life. I, for example, employed the word “groovy” well into my twenties, until I once
used it as a panelist on a TV political talk show, while discussing the sociopolitical ramifications of a gubernatorial veto. The studio audience actually laughed. In your case, when being interviewed about your nomination to the U.S. Supreme Court, you do not want to say, “I was, like, ‘No way,’ and the president goes, ‘For realz, yo,’ and . . .”

The index of male physical pleasure can be plotted by two lines on a chart. One of these lines, which begins very high in one’s younger years, represents the pleasures of the fedroom. The other, which begins quite low, represents the pleasures of the bathroom. I am assured by men older than I that these lines eventually intersect. I do not want to presume to tell you how to prepare for this moment, but I will share my plan, if it will be of help. When those two lines intersect, I will commit hari-kari. I will aim for my stomach, but will probably hit my prostate.

Ok, so it mainly applies to men – but still hilarious! Click here to read the rest of his advice!

Thanks go to Newly for this find!

After a free wine tasting at Millenium Park. My kind of town!

At the Cubs game with the housemates. First night out with all of us together, good times even if the cubs are losing! Beer helps!