I have had and HSBC savings account for quite some time now. I direct deposit my paychecks to my savings account for the 5.05% return – but the problem is that my Amex card won’t take payments from a Savings Account. It’s no big deal, as I just schedule the money that I need to be transferred to my checking account. The other factor that lead to this disastrous mistake is that I leave very little money in my checking account. Only $100-$200 for the month. I had a rather large payment coming up for my credit card ~$2500. Well, about two days before the payment was due, I got a phone call from my bank’s automated system that notifies me that I have a new deposit. I ignored it, as it I knew what it was. The following day I checked my account, and to my dismay I was $2500 overdrawn! Instead of transferring from my savings to my checking, I had done the reverse. I desperately needed $5000 to bring my account above the red, as well as to pay off my card which was due the next day. I already had been charged $25 for overdrawing – I had no idea if the charges were to continue each day I was overdrawn – nor if I would also have a hefty finance charge on the credit card. I went into panic mode, calling my bank, calling my credit card. The only option I had was to wait the 3 business days for another transfer from my HSBC account. One of my co-workers had overheard me on the phone, and asked if he could help in any way. I jokingly said “you don’t happen to have $5000 I can borrow, do you?”. About an hour later, he came into my office with an envelope with $5k in cash! I couldn’t believe it! I thanked him profusely, telling him he didn’t have to do that at all… but I was eternally grateful! On my way to the bank with his money, I realized that it was the most cash I have ever handled at once! I deposited it immediately. The following Monday, when the funds had finally come through, I went to get the cash to give back to him – I had to take a picture! Fitty Benjamins – didn’t quite fit in my wallet!

He beat me to it!

Just don’t show him this!

Saw this on Andrik’s blog and had to try it.

Deep thunder rolls as the temperature drops ever so slightly. A cool breeze flows through the open windows. I rush to shut off the lights and twist open the blinds just enough to see the sky – another far off rumble. I wait in silence for a spark to illuminate the heavens. My patience is rewarded with a furious and dazzling flash. I count out the seconds before the thunder tumbles in. The distance is still large. It is followed by a great silence, as if all of nature hushed in respect to the oncoming power. Everything is still. I hear the sound of rushed footsteps passing by trying to outrun the downpour, as others shut their windows. The smell of new rain precedes the droplets. A patter fills the air as the leaves dance with each raindrop’s descent. The sound grows as the rain seeks out every corner – it now permeates the air. Jagged white tears in the sky trigger brighter flashes. A sudden clap of thunder overpowers all other sounds for a brief moment, giving way to the crescendo of the rain tapping perpetually. The water begins to satiate the soil and blanket the sidewalks and roads – the asphalt glimmers under the golden glow of the streetlights. Another sequence of blazing light fills the air and penetrates the room – the resulting rumble enters from all around. The storm is near…

I was just going to write “July has just started” when I realized that its already half way over! The first two weeks of July have been non-stop. It all started with the annual “Cap of July” party. Which ended up being a 4pm-5am marathon – due in part to Dave’s insisting that we hit Tai’s on our way home. Thankfully, at about 2am, I realized that I needed to start drinking water. I did find out that David and Paige are engaged – congrats to the two of them!

I decided to take Thursday and Friday off after the 4th to extend the holiday through the weekend – a good choice, as it turns out! I spent the 3rd in McHenry, IL visiting Ben and Corrie. Ben, Mark and I used to work together and Mark and I attended their wedding a long time ago! They are doing great and it was a blast spending the 3rd and most of the 4th with them!

I finally met their new baby Ganon as well. Yes, Ganon. Lets just say that Corrie didn’t realize this until Ganon was born. That being said, he is adorable! What a wonderful family!

After spending a few hours at the Volo Car Museum – I headed back to Chicago and spent the rest of the evening hanging on Mel and Mike’s deck. They had quite a spread – just when I thought I couldn’t eat more! We played some bags and talked the night away. Dave and I ended up on his porch polishing off two bottles of champagne – for you see, he was a bit nervous… I’ll get to that. I did manage to get him inside before he toppled over the edge of the porch, thankfully.

Thursday I spent most of the day at the beach! What a gorgeous day it was as well! The water was the perfect temperature and I was blissfully unaware of any swim advisories! Friday I worked on the car at my parent’s house as I needed it to pass emissions before the 24th. It was quite a productive day, and ended with a phone call from Dave – he had proposed to Keri!! I wrapped up what I was working on and headed out to meet with them for dinner. We ended up having pizza and champagne on the back porch while listening to The Police concert!

The following day we headed to LaSalle, IL to visit Wourms and Gwen as it was her 30th birthday! I had my camera but somehow didn’t take a single picture! I guess I was winding down from the rest of the week. We had a blast playing ping-pong, darts, bags, foozball and even put some money down in a game of Texas Holdem! The 5 day holiday was perfect as I came back to work last week refreshed and was quite productive.

After borrowing TK’s rear bike rim on Saturday we went for an hour and a half ride on the lakefront it was beautiful out. Later that night TK’s parents threw an engagement party for him and Jos – had a fantastic time! It was great to finally meet Jos’ parents as well!

I took a break from most things computers during the five day weekend – it was actually quite nice. Though returning on Monday I had a ton of e-mail to respond to! Reconnecting has been a week long process – but I do want to start posting more so that I don’t end up with huge summaries like this one… more to come!

Greg and Mila have been backpacking through South America for over a week now. I’ve been meaning to link them for a while, click on the above picture to get to their blog. Follow them as they travel from Ecuador to Argentina – mostly by bus! They are currently in Peru – and it seems as though they are having a blast! 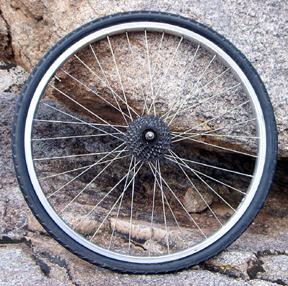 Last seen Friday afternoon when locking the bike up in the locked basement of apartment (I only locked the front wheel to the frame).

The kicker: TK’s brand new Trek was about 5 feet away, unlocked. I’m starting to feel like my stuff is targeted!

Woke up to a gorgeous 70 degree morning, got mike bike gear on and went downstairs to see my now crippled bike. Uggh…